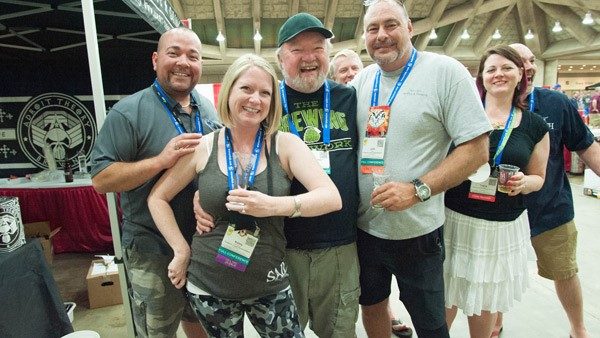 Every year, the American Homebrewers Association partners with a local brewery in the host city to brew the Homebrew Con commemorative beer. This collaboration is a celebration of the synergy between the homebrewing community and its professional craft brewer counterparts. Many craft breweries have been opened by former AHA-member homebrewers, and being chosen to brew the commemorative beer is an honor that symbolizes this relationship.

Homebrew Con will take place in Minneapolis June 15–17, but the collaboration to brew this year’s commemorative beer began on February 12 at Surly Brewing Company. About 500 Minneapolis-area homebrewers arrived at Surly that afternoon with empty buckets, kegs, and carboys, and left the brewery with 5 gallons of wort that had been boiled, oxygenated, and chilled – ready to be fermented as soon as they brought it home. This AHA Rally was the third such event Surly has hosted since 2009, except this year the wort Surly brewed will make another appearance at Homebrew Con in June. That’s because this year, the wort given out is also the base wort for the Homebrew Con 2017 commemorative beer.

Surly Brewing Company provided a slightly tart, oaked pale base wort that is conducive to a variety of fermentation and aging processes. The malt bill primarily consisted of Simpsons Golden Promise malt (82%), accentuated by Weyermann wheat malt (9%), Weyermann acidulated malt (4%), and Grain Millers flaked wheat (5%). All malts and adjuncts were graciously donated by Brewers Supply Group. The wort was further acidified and oaked through mysterious processes designed by Surly’s brewing team. Bittering is minimal, with an estimated 10 to 15 IBUs. 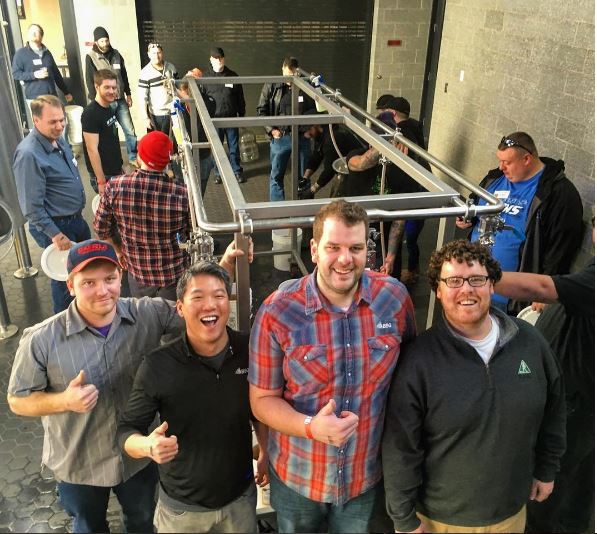 “I started out as a homebrewer, and many of our staff here at Surly are also still very active homebrewers, so they are excited to partner with our local AHA members on this project,” said Surly head brewer Ben Smith before the Rally. “The final post-fermentation product that will be bottled for conference attendees in June is still being tinkered with at the moment. I know that we will be aging it on some new oak barrels for a period of time, possibly with a Brettanomyces strain. Beyond that, we are still working out some logistics, though. It’s possible that it will be blended with a stainless-fermented version of itself, or possibly dry hopped in the barrels. I’m not sure what it will be yet, so I’m hesitant to label it as any one specific style. It will be an incredibly versatile beer to work with for the homebrewers, though.”

The Surly brew team built the wort for a 1.070 original gravity. Surly’s version of the beer finished fermentation at around 1.008, or about 8 percent ABV. The only hop addition was a low dose of Warrior hops at the beginning of the boil to deliver minimal bitterness.

“If folks want to re-boil the wort to make it hoppier before they pitch their yeast, they can absolutely do that,” said Smith. “But if they want to take it down the road to a Berliner [weisse] or something like that, they can absolutely do that, too. It’s a total blank slate.” The oak character is low, as is acidification. Smith suggested a wide variety of yeast strains to use for home fermentation.

“We really don’t want to force people into a specific style—that’s what is going to make this beer so cool. People can use a Belgian strain, or a hefe, or even something more clean fermenting. Turning it in to a sour beer would also be excellent. It is going to be an extremely versatile beer.”

Each person who attends Homebrew Con will be given a bottle of the Surly commemorative beer with their registration. Conference attendees will also have plenty of opportunity to sample the official commemorative beer throughout the week and compare it to their own version, as well as their fellow homebrewers’ versions.

“We are excited to partner with Surly on the Homebrew Con commemorative beer this year.  For Surly to provide rally-goers with the opportunity to ferment out their own versions of this beer is truly unique in the history of Homebrew Con,” said AHA director Gary Glass.  “We encourage rally attendees to bring their renditions of this beer to Homebrew Con so everyone can compare the homebrewed versions to Surly’s commemorative beer.”