Attendees at the 2015 National Homebrewers Conference in San Diego are in for a treat!

To create this year’s Commemorative Beers, the AHA Conference local committee teamed up with commercial breweries with long-established connections to homebrewing to create six outstanding beers.

Conference attendees will each get to take home two randomly-selected bottles to share with friends in hopes of creating one of the world’s biggest bottle shares!

And don’t forget to register for the National Homebrewers Conference!

Tomme Authur, 2015 keynote speaker and head brewer at The Lost Abbey, has recently unveiled the team’s third brand, The Hop Concept. Lemon Yellow Sun is a session version of the brand’s newest offering, Lemon and Grassy. The focus of this brew is the exciting profile of the Lemon Drop, Nelson and Sorachi Ace hops.

Be Bold, Be a Homebrewer

Jamil Zainasheff (Heretic), Mike Mraz (Mraz) and Julian Shrago (Beechwood) are all homebrewers at heart. Every time they reach for the mash paddle, they remember the inspiration of the hobby that got them started down their career paths. The team of three tapped into this inspiration to create Be Bold, Be A Homebrewer, a Belgian-style ale.

Chuck Silva, Green Flash brewmaster, and head brewer Erik Jensen, developed the idea for Golden Naked Promise during a discussion about Simpson’s Golden Naked Oats, a clean malt with a kick of biscuit. The oats served as their muse for a British-inspired summer pale ale, selecting other “golden” ingredients like Golden Promise malt and Styrian Goldings hops. The result is a light-bodied, malt-forward pale ale with an earthy spice and hint of candied orange zest.

Brewmaster Paul Segura and his team at Karl Strauss call their commercial brewery “home.” Most of the folks working at the brewery can trace their roots back to a homebrew system, which is what inspired Karl Strauss ‘Home’ Brew, a San Diego-style India pale ale. The simple malt bill paired with an array of flavorful and aromatic hops makes for an IPA that pays homage to the dedication, determination and ingenuity of homebrewers.

What Would Dave Drink?

Dave Levonian, well-known homebrewer and craft beer enthusiast, passed away in 2008, before his fortieth birthday. Dave was known for his Belgian dubbel homebrew recipe, which many San Diego-based breweries went on to brew, calling it Brother Levonian. Paul Sangster, owner of Rip Current, is putting his own twist on the beer, which he dubbed What Would Dave Order? Sangster said the recipe is very similar to Dave’s original, with a few tweaks to make it more commercial brewery-friendly. 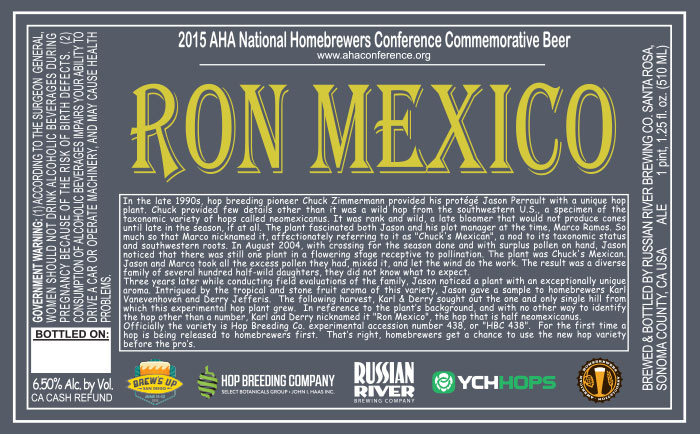 The Hop Breeding Co. (HBC) is releasing a new variety hop currently known as HBC-435. With a history that goes back to the late 1990s, HBC-435 is affectionately known as “Ron Mexico” after a pair of homebrewers were gifted some a decade ago. The name pays homage to the hop plant’s background, which is half neomexicanus. The hop has distinct notes of tropical and stone fruits, creating a delicious hop aroma in this session IPA brewed by Vinnie Cilurzo, owner and brewmaster at Russian River.

Thank you to Chad Stevens and the participating breweries for helping to put together this online feature!