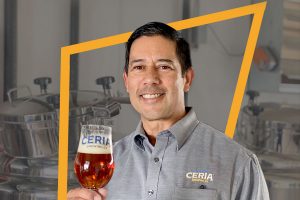 The Complete Joy of…Metamorphosing from Homebrewer to Pro Brewer

Many homebrewers fantasize of one day becoming a professional brewer who creates blockbuster beers that fans can’t wait to savor; while at the same time many pro brewers often come from a completely different line of work.

The 2022 keynote address by Keith Villa, Ph.D. will describe how he realized his fantasies and transformed from homebrewer to pro brewer, to the founder of Blue Moon, and ultimately to the creator of a new kind of beverage through Ceria Brewing Company.

Keith Villa is the Brewmaster and Co-Founder of Ceria Brewing Company in Arvada, Colorado. A Colorado native, Keith has a BA in Molecular Biology from the University of Colorado (CU) Boulder and a Ph.D. in Brewing Science from the University of Brussels in Belgium. Keith was a brewmaster for Coors for 32 years and is known as the founder and creator of Blue Moon Brewing Company. Additionally, he has been a Beer Judge Certification Program (BJCP) certified judge since 1994 and has judged at the Great American Beer Festival® (GABF), World Beer Cup® (WBC), and National Homebrew Competition (NHC).

Keith is a past guest lecturer at Colorado State University, CU Boulder, the University of Denver – Daniels School of Business, and Metro State University. He is the winner of 11 GABF medals and the 2010 Large Brewing Company of the Year, as well as a five-time WBC medal winner and the 2008 Large Brewing Company Champion Brewery. Keith has been homebrewing since 1982, and is the author of numerous brewing articles and the recent Brewers Publications book Brewing with Cannabis: Using THC and CBD in Beer.