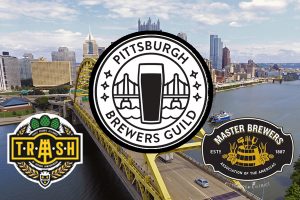 May 19, 2022, Pittsburgh, PA — In celebration of Pittsburgh hosting Homebrew Con 2022, several area breweries will collaborate with local homebrewers on a wide range of beers.

Homebrew Con is an annual event put on by the American Homebrewers Association. This year’s gathering at the David L. Lawrence Convention Center in Pittsburgh (June 23-25) is expected to attract about 1,500 homebrewers and suppliers.

In conjunction with Homebrew Con 2022, the Pittsburgh Brewers Guild (PBG) partnered with the Masters Brewers Association (District Pittsburgh) and Three Rivers Association of Serious Homebrewers (TRASH) to pair up top local performers at TRASH’s annual homebrew competition, which was held April 23, with a number of PBG member breweries.

And the Collaborators Are…

Below are the planned collaborating partners and the category in which the homebrewer earned a top TRASH competition score.

In addition, Hitchhiker Brewing plans to welcome any interested local homebrew club member for an open brew day to be scheduled later at its Sharpsburg brewery. Andy Kwiatkowski, Hitchhiker’s head of brewing operations, remains very active in the homebrew community and served as a judge at the competition.

More information about when and where the collaboration beers will be available will be shared soon.

“A number of folks in our industry – including brewery owners and head brewers – started as homebrewers,” said Malcolm Frazer, head brewer at Hop Farm Brewing in Lawrenceville and a Pittsburgh Brewers Guild board member, who helped organize the collaborations. “With these collaborations we get to celebrate and reinforce that connection between professional and amateur brewers. Our member breweries are very excited about this – the response has been tremendous.”

In addition to the collaboration beers, the PBG is working with VisitPITTSBURGH and the Brewers Association (the American Homebrewers Association parent organization) to promote Pittsburgh beer during the course of Homebrew Con. The PBG and VisitPITTSBURGH will operate a space at the convention center to answer questions about Pittsburgh and pour local beer, including some of the homebrewer collaborations. The PBG is also helping the Brewers Association create a special Homebrew Con version of its popular Pittsburgh Brewery Guide, which includes brewery trail maps and information about more than 40 Allegheny County breweries.

About the Pittsburgh Brewers Guild