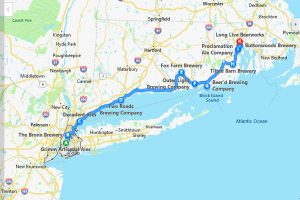 Nearly 200 miles of driving separate Lower Manhattan and Downcity Providence, with something in the range of a billion breweries and restaurants—an official tally—to stop at along the way. For those who prefer not to leave those miles and meals to chance, here are 10 stops worth your attention along that I-95 ride. Just make sure to confirm brewery hours and offerings in advance, and always, always drive sober.

Hop back on the highway and you’ll be in Providence in minutes. Once settled, will you crash the party at Long Live Beerworks, lounge in Providence landmark Trinity Brew House, venture out to Beer on Earth’s new downtown location, or save your palate for homebrew? The choice is yours. We just hope you’re still thirsty.