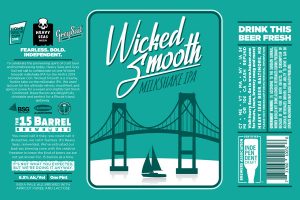 The 2019 Homebrew Con commemorative beer will be a collaboration between Grey Sail Brewing Company in Westerly, R.I., and Heavy Seas Beer in Baltimore, M.D. When Grey Sail head brewer Michelle Kirms connected with longtime Heavy Seas brewmaster Chris Leonard, it didn’t take long for the two of them to settle on brewing a style that would resonate with homebrewers in the Northeast: New England IPA.

Wicked Smooth is brewed to taste like something you wouldn’t expect. Lallemand’s East Coast Ale yeast is more flocculent than many other New England IPA yeasts, so the beer’s hazy appearance derives more from dry-hop polyphenols than from suspended yeast. Look for an orange-pink hue and lots of citrus and stone-fruit flavors.

“The combination of Citra hops and Mosaic is so good. We use that combo in a lot of our beers, including our flagship hoppy beer, Captain’s Daughter Double IPA. Both of those hops will give this beer an incredible aroma that will play off of the apricot puree and lactose in a fun way,” said Michelle Kirms, “We experiment a lot with our Wheelhouse Creative Ale series of rotating beers. In the past, we’ve done an oyster stout, a key lime Kölsch, and several NEIPAs. I love the experimental aspect of brewing, and it will be fun to create another hazy juice bomb.”

Heavy Seas brewmaster Chris Leonard started off as a homebrewer in the mid-1990s before beginning his career as a craft brewer.

“When I got started there were 800 breweries in the country. Now there are over 7,000, most of them having been opened by former homebrewers,” said Leonard. “Besides perhaps the culinary world, there aren’t many industries that display so much synergy between the amateur hobbyists and the professionals. The relationship between homebrewers and craft brewers is truly unique. I was able to experience that firsthand when I gave a presentation at the 2016 Homebrew Con on high-gravity brewing. The attendees were all so inquisitive and complimentary. When we were presented the opportunity to collaborate with Grey Sail on the Homebrew Con beer this year, we were thrilled to be a part of the conference again.”