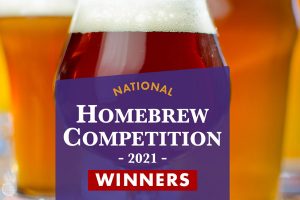 Boulder, Colo. — The American Homebrewers Association (AHA) awarded more than 120 medals in 40 categories to amateur brewers and homebrew clubs worldwide at the 2021 National Homebrew Competition awards ceremony. Winners of the world’s largest homebrew competition were recognized for the most outstanding homemade beer, mead, and cider during a ceremony livestream.

Over its 43-year history, 156,830 brews have been evaluated since the inaugural AHA National Homebrew Competition in 1979 in Boulder, Colo. This year’s competition saw more than 5,045 entries from 2,037 homebrewers located in 50 states, Washington, D.C., Puerto Rico, and 13 countries.